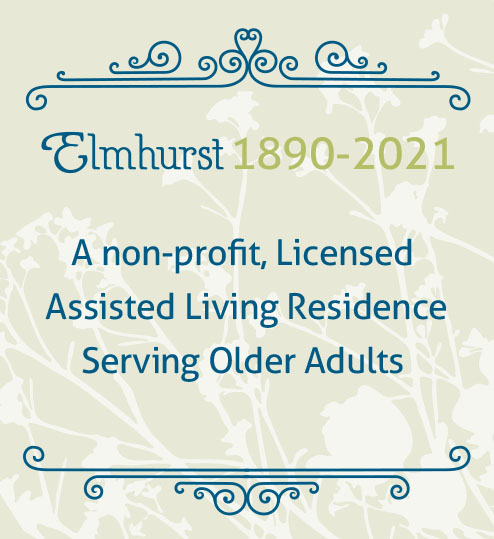 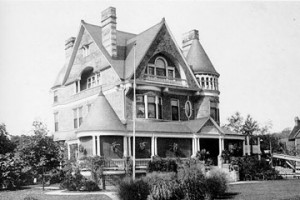 Elmhurst, The House of Friendship, Inc., is a retirement residence located in a landmark historic Victorian-era home that has seen the construction of two beautiful additions, at 1228 National Road in Wheeling’s Pleasant Valley neighborhood. Through the generosity of the family of Samuel S. Bloch and the vision of an organization known as the West Virginia Home for Aged Women, Elmhurst has evolved into the premier retirement residence in the Ohio Valley.

On April 26, 1888, doors opened at the West Virginia Home for Aged at 37 Thirteenth Street in Center Wheeling. The home established a permanent residence for aged women and as a temporary residence for wayward and homeless girls.

In February, 1922, due to the formation of the local Florence Crittenton Home, the organization redefined its admission policy to accept only elderly women and changed its name to the West Virginia Home for Aged Women.

Built in 1891, the large Victorian mansion was christened “Elmhurst” because of the large elm trees which were planted by Mr. Bloch himself. Also located on the estate at the time it was donated were several other structures, including a home for the grounds keeper, a small playhouse used by the Bloch children, a well that furnished fresh spring water to the estate, and a bungalow which was chiefly used by Jesse and Harold Bloch to entertain college friends.

Jesse Bloch stated at a meeting formally donating the house in memory of his mother, Bertha Bloch, “My sisters, my brother, and I desire to make this gift with the feeling that we are doing something that both father and mother would have approved.”

Upon donating the mansion to the Home for Aged Women, on whose board Mrs. Samuel Bloch served from 1890 to 1894, its name became known as “The House of Friendship.”

In order to accommodate more elderly women, the board of directors decided to add a wing onto the left side of the mansion, connecting the two structures. The new wing, which was completed in 1942, provided twenty-four private rooms. Although each resident had a private room, they shared communal bathrooms located on each floor.

With new needs emerging for Wheeling’s senior citizens, and a desire to broaden its appeal, The House of Friendship decided to remodel the facility again in 1989. The project included the addition of adjoining bathrooms to each of the rooms located in the wing, an addition of a fourth floor consisting of four rooms, installation of a modernized kitchen and elevator, and a complete refurbishing of the interior of both the wing and the mansion.

The goals of the architects, Peter Greer and James Kling of DRS Hundley Kling Gmitter, were to design the new wing in architectural harmony with the Victorian-style of the original mansion. The expanded structure increased capacity to 36 residents. It included enlarged entrance ways, a new terrace area, a raised garden, and air conditioning.

The interior decor, like the exterior, also was coordinated to correspond to the original home by designer Lynn Buch. While retaining some of the original mansion’s furniture and adding many similar period pieces, the design for the new wing allows Elmhurst’s elegant atmosphere to flow uninterrupted throughout both buildings.

At the completion of construction, the House of Friendship restored the name “Elmhurst” to its title. Today it continues to be known as Elmhurst, The House of Friendship,Inc. It was at this same time that Elmhurst began accepting men and couples, as well as women, as residents.

In recognition of the addition and renovation, the Victorian Wheeling Society, LTD and the Wheeling Civitan Club presented Elmhurst with the Grand Victorian Property Improvement Award in 1992. In 1997, Elmhurst received the Gold Seal Award for Renovated Senior Housing from the National Association of Home Builders and National Council of Senior Housing and the Best in Renovation Category from The Society for the Advancement of Gerontological Environments. Elmhurst also was listed among the top retirement homes by “Where to Retire” magazine.

In a letter to Jesse Bloch after the donation of the home, Mrs. Nelle E. Faris, president of the Board of Lady Managers of the Home for the Aged, writes, “It (the Bloch home) will surely bring comfort, peace, and joy into the lives of many, and will ever be a Beacon Light – for those who need a place to call home.”

In 2009, Elmhurst underwent another expansion with the addition of a second wing designed by Victor Greco from the Wheeling office of Schamu Machowski Greco Architects. The 22,000 square foot, four-story addition features four two-bedroom suites and eight one-bedroom suites; an additional activity room; a large storage locker room for all residents; a second elevator, and administrative offices. A new covered main entrance opens into the lobby and a paved parking lot for residents and visitors adjoins the entry.

The new wing complements the previous structure, incorporating design elements such as curved arches, pillars, pocket doors as well as architectural adornments that reflect the ornate Victorian elements of the original mansion.

The building’s existing dining room has been enlarged and the mansion’s original billiards room was restored. Outside the complex, lush landscaping includes beautiful flower gardens highlighted by numerous rose bushes and walking paths. A separate garage apartment building was demolished to provide an unobstructed view of the tree-laced Wheeling Creek. A gazebo and a large deck jutting out over the creek bank offers residents a comfortable setting from which to observe nature.

The first floor houses the administrative offices, as well as a spacious mutli-purpose room. The lobby is enhanced by a large fireplace and seating areas.

While remaining true to the building’s architectural heritage, the new wing subtly incorporates contemporary features to serve residents’ needs. Hallways are wider, and recessed lighting illuminates the walkways. As a “green” element, lighting fixtures in bathrooms and closets are equipped with motion sensors to turn lights on and off as people enter and exit.